The idea of following an east west line across Europe seemed simple enough- look on maps online, identify points that match the same latitude as Manchester Vermont, and go from point to point.

Without a ton of time however, choices need to be made. The first point of landing in Europe- Camariñas Spain in Galicia, seemed like a good start. Then somehow coursing over towards Bilbao Spain, a significant place for this latitude idea in that the first sign I was on to something- the idea of same latitude, same light, was winked at by the fact of the Guggenheim Museum being almost exactly and directly east (within five minutes of my exact latitude line, and an exact match for Dorset VT, just a bit north of my home here in Manchester).

I was also given a hint through conversation struck up in a wine bar in Oakland- that one of the best restaurants in Basque Country, was Bar Blanco in Cangas del Narcea, a small city in the heart of the Basque region and on the way to Bilbao. Also, it was an exact latitudinal match for me, so a good indicator that I should indeed go there.

Now, what I want to get to is what the experience is like traveling along a latitude line.

An additional component of latitude journeys is the simple fact that roads don’t always conveniently take you east-west. This is certainly the case in the Northeastern U.S., where going directly east across Vermont, New Hampshire and Maine is essentially impossible, due to rivers, mountain ranges, and the historical commerce routes which tended to ship products from New England- lumber, wool, etc. down to the major urban centers. Northern Spain has better east west connectivity than New England, but there are still mountains and a bit of north south travel involved while going east or west. Trains are there, but they are limited, and time consuming- same with bus routes.

An ideal way to travel would be to spend a few days based in certain nodes along a latitude line, and then rent a car for a couple days here and there to do some wandering that is more time effective than walking. Biking could be a great option, however my instincts are to travel out of high season, and that also means a wintry mix of rain and even snow in Northern Spain, so not the ideal time for a cycling adventure.

So a major factor in latitudinal travel is…time. The more time you have relative to a stretch of east-west earth, the more time you have to lavish on places. I spent basically one day in Camariñas Spain. Three days would have resulted in a profoundly more in-depth experience, and perhaps some lasting connections. After one day, what I have is leads, and a ‘place to come back to.’

Now, my four days coursing across Northern Spain were good for the purposes of just seeing what is there. No amount of online research can replace being on the ground, and the feel that you gain.

Even for such a short time, I had major latitudinal ‘wins’ that validated the idea of specific latitude travel, that gave me nourishment for this project at a kind of cross roads, where the latitude movement could become something of a closed book. Instead, I feel more excited about the project than ever, not in the visceral way of the original brainstorm, but in the sustained enduring way of ‘keep on keepin on’.

My method of latitudinal travel is to pop in to places, and stop often. Northern Spain, and really, all of Western Europe, provides the perfect venue for this- the bar/cafe. These places serve drinks, coffee and breakfast, small lunches, beers/wine, and they are gathering points for locals. So a quick pop in to these places some four five times a day, while traveling east, became a good measuring stick for how culture changes across a latitude line, and how it stays the same.

One source of intrigue was what people drink, and how it changes over distance. Slight changes first, then more significant ones. The particular beer of the region, Estrella, goes from the only choice in Galicia, to one of a few options in Basque country. Espresso becomes more typically with milk the further east in Spain, before returning to espresso or cappucino- those two choices, in central Italy.

The paper read changes as well. Papers are still read widely across the line on 43.10. But in some places there is one paper of record, in others there are two.

Nuances become evident as you go east and west. That’s the beauty of this kind of travel. Crops will be similar for longer stretches, and at similar growth in lifecycle, then north south travel. The backdrop feels similar, even if just based on the recognition of the common platform of same latitude, which contributes to the sense of something similar. 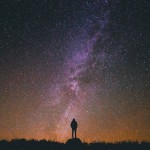 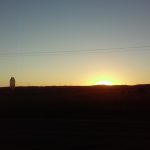